We have  a  selection of these handpainted kimono designs from around the 1930's. They're exquisitely painted on paper in fine detail by the one artist and in the actual scale of the finished fabric (approx 34.5 x 51 cm). You can see that each painting is one repeat in a design. They're mostly bold traditional floral and fan patterns like these examples here  (sorry the photos are a little wonky!) I  love these and will be keeping a few for my own collection. 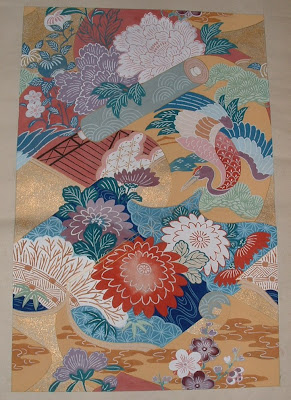 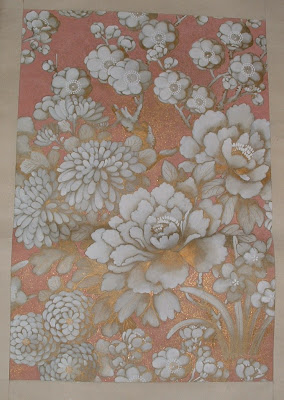 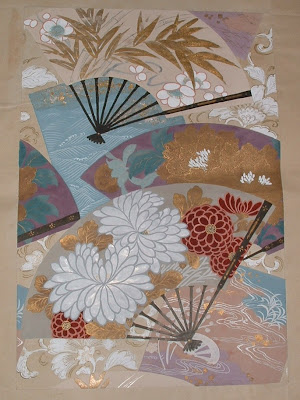 Posted by Jan at 5:56 PM No comments: Links to this post

Here are some more examples from my collection of how kimono remnants have been traditionally re-used in Japan. The first two photos are patchwork juban undergarments. The juban is worn under the kimono with a changeable collar (han-eri) which peeks out at the neck of the kimono. The first one here is a 19th century  half-length 'hanjuban'.  While the sleeves are a quite sturdy printed cotton the body of the garment is made up of delicate strips of plain coloured kimono lining silk and fragments of printed chirimen and other kimono silks.  It reminds me that  necessity and simplicity often create the most striking designs - it's one of my favourite pieces. 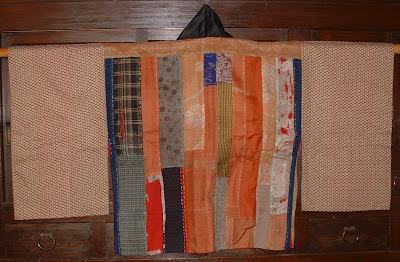 The second juban is a similar age to the hanjuban. It's made up of remnants of  fine silk shibori-dyed pieces some of which may have been recycled from other juban while many seem to be old shibori hair bands that were used in traditional coiffures.  While the colours in these pieces are now subtle and faded it was once common to have stunningly vibrant shibori juban. There is a tradition in Japan of very gorgeous linings and undergarments  which would never have been seen in public. The standard explanation for this is that it was originally a reaction to Edo-period (1600-1868) sumptuary laws which controlled  the colour and types of fabric which could be worn by different classes of people. The growing merchant class in this period had money but not traditional social status.  Even though the degree to which the sumptuary laws were  enforced varied over time, in general the luxurious cloth and bold designs which many in the merchant classes wanted and could  afford had to remain hidden  either in undergarments and linings or by wearing silk checks and stripes which at a casual glance appeared to be cotton. I'm sure there's more to the story than this and it's definitely something I'd like to look into more in the future. 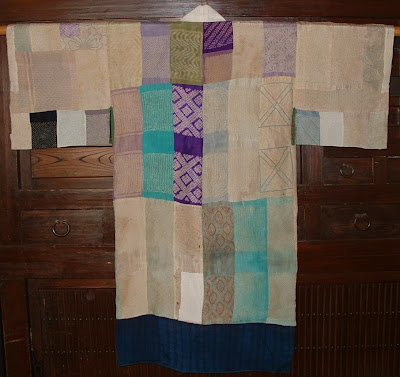 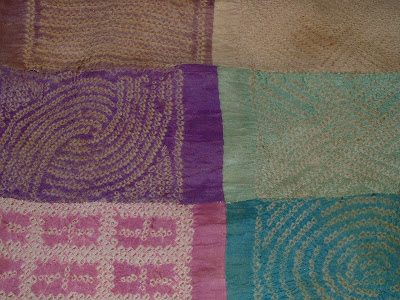 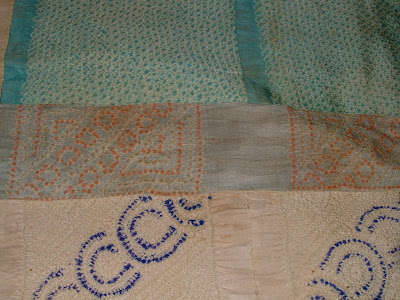 The next photo is a patchwork Buddhist altar cloth (yosegire-uchishiki) made from remnants of kimono fabrics. It probably dates from the early 20th century. Altar cloths were triangular or rectangular and often had a plain strip of white cotton which sat on the top of the altar allowing the decorative part to hang down the front. This design was so that it wouldn't matter if the top section was damaged by candles or incense. Altar cloths are more typically finely embroidered pieces but there is also a strong tradition of patchwork pieces which were made from old  treasured kimonos that had been donated to the temple (though usually the cloth would have been made from a single kimono) . This one has an unusual, but not unique,  homemade, informal feel. I don't know how many people may have been involved in making it. They often have the name of the donor written on the back but there are no markings at all on this one. There is also some importance placed on the act of stitiching in Buddhist textiles. It was once considered important, for example, for priests to stitch their own 'kesa' robes from donated remnants. The act of stitching was seen as a meditative and the garment would be imbued with something of the spirit of its maker.  While this particular altar cloth is very humble in comparison to most I like to think that the people who stitched it have given it a sense of joy and sincerity that grander ones lack. 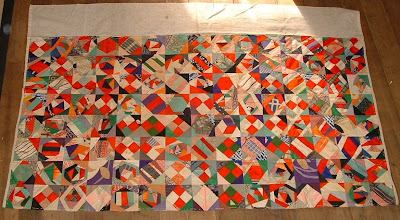 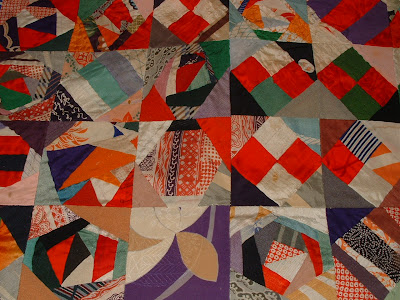 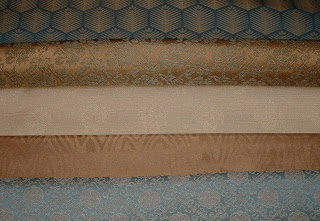 I'm really excited that we are now stocking some lovely rolls of  donsu; Japanese damask.  Donsu ( 緞子) was originally imported into Japan from China and has long been used for scroll backings and tea ceremony textiles such as shifuku bags for storing implements.  Donsu is a reversible satin weave fabric  either in a single colour or with different coloured warp and weft. Quite often the contrasting colour will be a gold metallic thread.  The colours are typically subtle, elegant, muted tones favoured for tea ceremony.  There is evidence that some of the original donsu which were imported from China had  been woven in more vibrant colours which were already very old and faded by the time they reached Japan and were used in tea ceremonies. Presumably the subtle 'wabi' aesthetic of the old fabrics was then recreated when the Japanese began to weave their own donsu.
The donsu we have in the shop now are mostly about 75cm wide. Some are pure silk - but it's not always easy to tell the silk and synthetic apart simply by look and feel as most of them have a lovely soft silky texture. I'm going to wash a few samples to see how they go. I think they'll be lovely for use in  cushions and other projects around the home, some clothing, evening bags and all sorts of other  things. I'm looking forward to seeing what uses my customers find for it.
Posted by Jan at 8:22 PM No comments: Links to this post

I planned to post here at least once a week but time just ran out last week. I had a new shipment arrive which is always exciting but keeps me very busy - it would be easier if we had space to put everything! Takashi's already put out lots of old tools and I'm in the middle of putting out baskets, ceramic bells,kimono and tenugui stands, old print copies, little souvenir kokeshi, Ainu bear carvings, Daruma ornaments, small sets of drawers and other intersting odds and ends. My favourite things in this shipment are rolls of 'donsu' Japanese damask - these are just beautiful. I'll write more about donsu later today.
Posted by Jan at 6:31 PM No comments: Links to this post

There is a strong tradition in Japan of re-using scraps of kimono fabric to make little bags, dolls and other osaikumono(craft items). From the second half of the Edo-period (1603-1867) it became a popular craft with wealthy women who had the time to sit and stitch very fine mostly decorative items. They also had access to the fine pieces of silk and thread and found uses for even the tiniest fragments. (While the less well-off were recycling their humbler scraps of cotton into more functional items such as nappies, cleaning cloths and patches for their clothes and bedding). The most popular silk for these crafts was chirimen crepe which not only often featured fine yuzen-dyed designs but also has the natural elasticity to make it ideal to use on small intricate projects. One popular craft was making oshie pictures. These are small padded collages such as this 19th century example from my collection:

In the Meiji period (1868-1912)these crafts began to be taught in home economics classes at girls' high schools and so became more widely spread throughout Japan. The following picture is an illustration of projects in a sewing book from 1915: 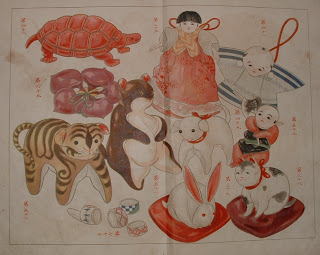 Many of the pieces feature red chirimen - which was the predominant colour used for kimono linings. Some of the popular items to make were little drawstring bags, often in the shape of flowers, birds or animals, amulets, covered boxes, thimbles, cases for various items such as toothpicks or incense, and (my favourite) maigofuda 'lost child tags'. These had plain white cotton or paper on the reverse side with the child's name and address written on them and were attached to the child's obi. Interestingly Japan still has a tradition of lovely name tags for children's bags. Here are a few old samples of chirimen crafts from my collection. From top to bottom: a maigofuda, a small kinchaku drawstring bag, a covered box with an oshie tiger and a miniature doll bag. . 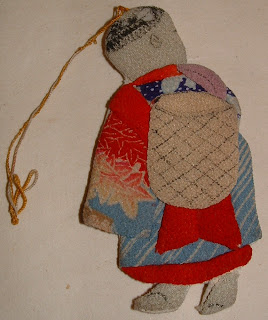 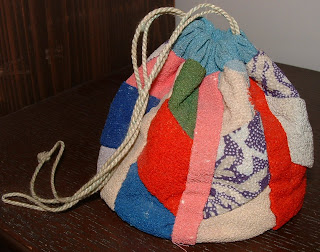 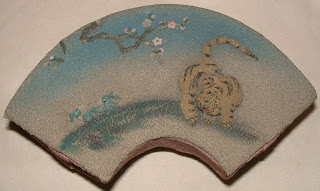 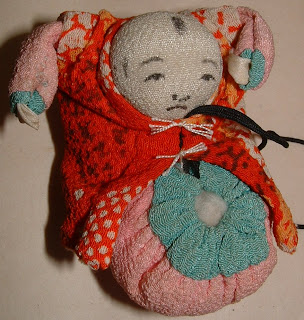 Like many Japanese textile traditions these crafts declined during the war and post-war years but have been revived as popular handcrafts in the last 20 or 30 years. There is a huge range of books available (in Japanese of course) on how to make both traditional patterns and modern variations. At the same time the price for old chirimen silks has risen enormously partly because it is also used for making and dressing dolls. Unfortunately there is not very much available in English about these patterns or the history of chirimen and chirimen crafts. Kumiko Sudo's 'Omiyage' (which we stock) has many of the traditional patterns, but because of the fabrics she's used doesn't have quite the same sensibility as the Japanese books. Please have a chat to me in the shop if you're interested in trying some of these traditional projects, or perhaps going beyond what's in 'Omiyage'. There's a small selection of old chirimen in the shop but it's also possible to make beautiful items using other(cheaper)soft silks from the remnant baskets.
Posted by Jan at 5:02 PM No comments: Links to this post