I'm having some camera problems at the moment, so today I'm showing some more illustrations from one of the sewing books in my collection. This is one of my very favourites. It's been put together from rescued pages of two volumes of a grade 5 sewing text book. A lot of pages are missing and the rest have been put together with a cover recycled from an old notebook and two pieces of red cotton. They're cheaply printed on very poor quality paper from February and April 1946,  the first year of occupation, and have 'Approved by Ministry of Education' printed in English. For such a humble publication these simple illustrations are beautifully drawn. I love them. 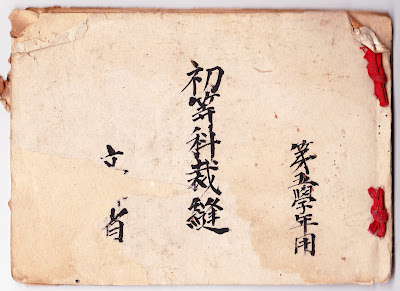 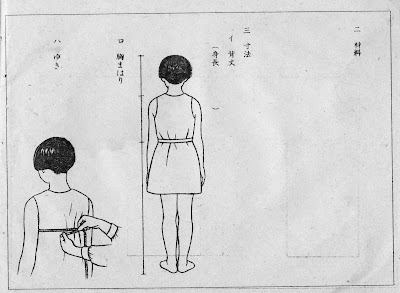 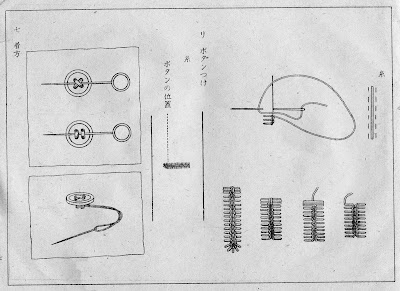 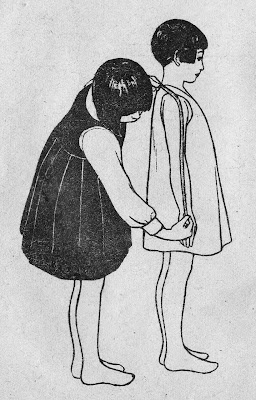 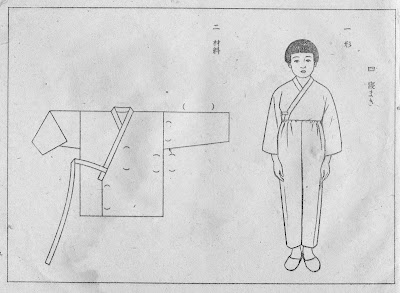 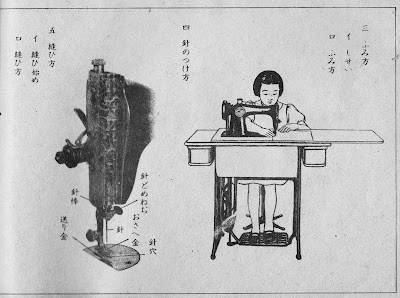 Posted by Jan at 6:55 PM No comments: Links to this post

I didn't set out to collect old Japanese photos but we seem to have accumulated quite alot. Some are snapshots still in their old albums,  some like those shown here are professionally taken. These ones are all pre-war and some possibly taken before the turn of the century. There is a certain poignancy to these old pictures and they somehow remind us that history isn't just about dates and events but about real people and the lives they led. You can click on any of the photos to enlarge them.

This first photo was taken in Kochi on the south of Shikoku. It's essentially a portrait of her hair and her beautiful yuzen-dyed furisode (long-sleeved) kimono.... 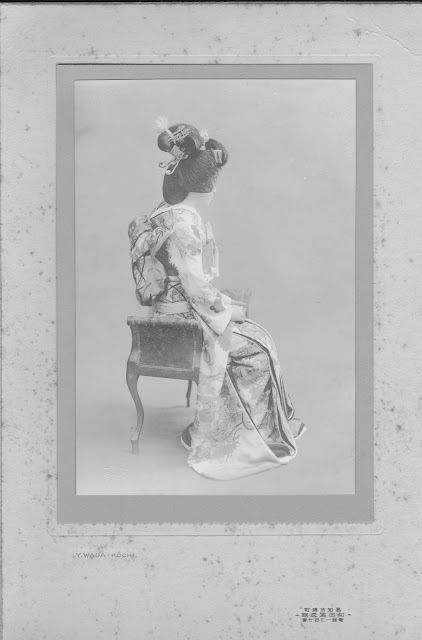 I think this next one is probably students and their teacher. I wonder if it might have been a sewing class ( as in my last post). I have quite a few old photos where the women have pulled their hands up inside their kimono sleeves like this. I'm not sure why they did this because its not the case in all photos. Maybe the girl sitting on the left didn't understand either...  This photo is a good example of how popular stripes and geometric patterns were even with young women, and even for more formal situations such as this. The stereotypical image we have of  elaborate floral kimono  (as in the first photo) isn't what women wore every day. I have photos of my mother-in-law as a young woman before the war (but later than this photo) wearing wonderfully bold stripes. 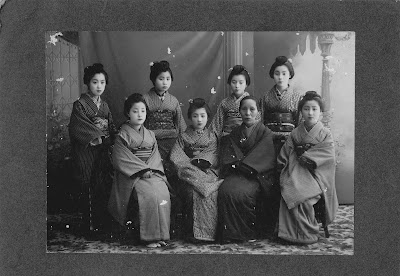 I'm guessing the hairstyles date this photo to the 1920's or early 30's, though I have seen some fairly radical bobs in earlier photos of children. I'm not sure if this was taken at New Year  or perhaps for another local festival. It's a studio portrait even though it's meant  to appear to be outdoors...the lack of shoes is one give away. In all the photos here except the last one everyone is only wearing tabi (the equivalent of socks), they would have left their other footwear at the entrance when they came into the studio) 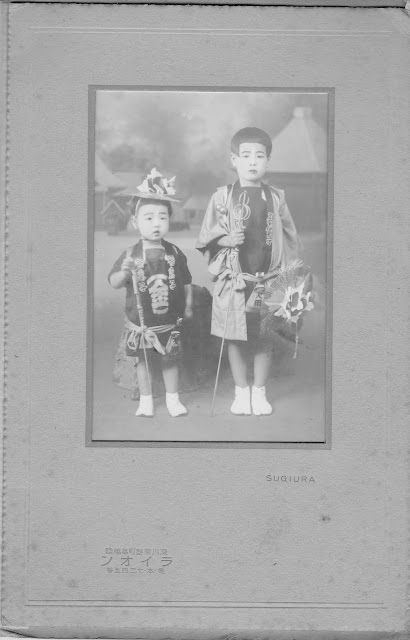 ﻿
The baby in this family portrait is very young so it may have been taken to celebrate his omiyamairi which is the baby's first shrine visit and the equivalent of a christening. The little boy on the right is wearing a military style uniform  which wasn't unusual for formal and ceremonial occasions right through the early 20th century.  My favourite thing in this photo is the man's hat! From the introduction of western clothing in the late 19th century various hybrid western/Japanese fashions appeared. The simple addition of the hat here shows a certain sense of style﻿. I like the little girl's beanie-style hat as well and I'm curious as to what it was made of. 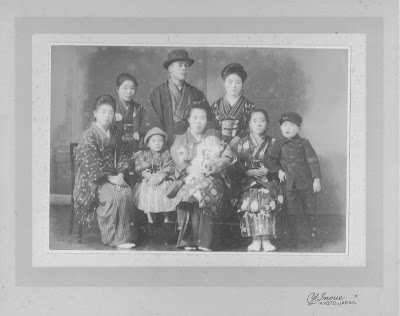 I only just noticed that the little boy in the next photo looks like he's wearing the same beanie! Now I'm wondering if he's the same little boy as in the last photo... (We may have got these photos at the same time - I can't remember).  Children in old Japanese photos often look very bulky like the little boy on the right. This was partly the layers they were wearing but also because they often wore quite large kimonos that had been tacked in at the shoulders and waist to fit. As the child grew the tacking could be undone and the kimono let out. I've had padded winter children's kimono in my collection that have been taken in like this and they are so bulky you wonder how the child could move at all. 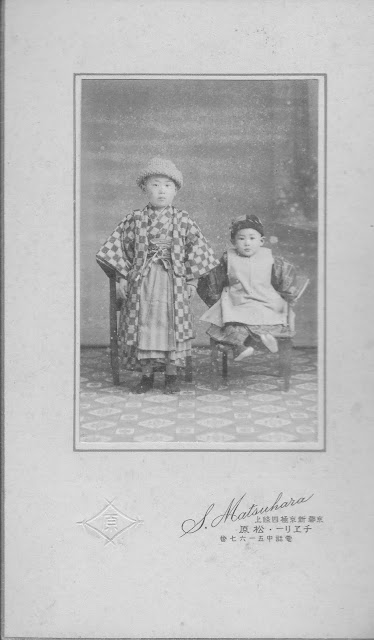 And finally another little boy wearing a similar apron to the one in the previous photo. The shop is called ﻿'Kodomoya' or 'Children's Shop'  and appears to sell clothing as well as toys. 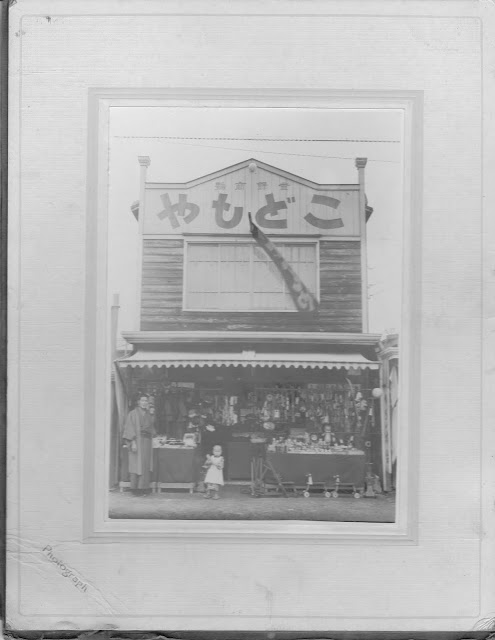 Posted by Jan at 8:13 PM No comments: Links to this post

Of all the books on Japanese textiles and social history that I've collected over the years I have a handful of favourites that I keep going back to. One of them is Memories of Silk and Straw, A Self-Portrait of Small-Town Japan. * This is an oral history of life in the pre-war years  by Dr Junichi Saga  a local doctor in Tsuchiura, north of Tokyo, who collected his elderly patients' reminiscences and published them in 1987.  I love this book! It lets us view ordinary Japanese life at a time not that long ago but that is for the most part unrecognisable to visitors to Japan today.  But of course in doing so also gives insight into Japanese society today. This is one of those books that I wish I'd read before I first went to Japan.

Here are a few extracts that relate to clothing and textiles (the photos are from my collection - not from the book):

The first is from  Mr Sano 'The Dyer' and should help us appreciate the work that has gone into the old  indigo cottons that I sell in the shop. Anyone interested in dying would find the whole chapter fascinating:

Nowadays there are plenty of chemical dyes on the market  that are simple enough even for non-professionals to handle; the color's also easy to control. But before these became available the stuff had to be made by boiling down the leaves of indigo plants. The way this was done depended on how dark a dye you wanted, but even a trained hand couldn't tell just by looking at the liquid what shade it would turn out to be. It was a tricky business...
... it was the weather that gave us the most trouble....the winter wasn't much fun...When the cloth was left to soak overnight by morning the tub would be covered with ice. You'd have to lift the ice out before you could wring the stuff out, and your hands  would get so numb you'd hardly be able to move them. When I couldn't even feel them anymore I used to go and knock them against the edge of the well to get the blood circulating again. And they'd soon  get all cracked and rough doing this . Then, when you had to put your hands into the (diluted) sulphuric acid during the cleaning stage it'd sting so much the pain would actually bring tears to your eyes. But they used to say that if you ever cried out from the pain you'd never become a proper dyer, so you just had to grin and bear it. 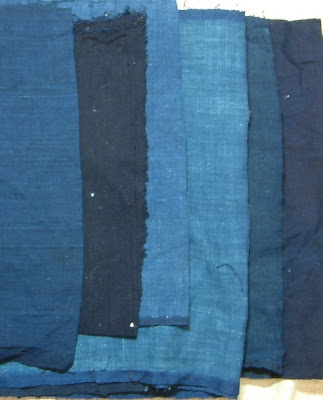 ﻿Mrs Ono from 'The Secondhand Shop' spoke of the poverty in those days:
I often think poor people today are as well dressed as the richest classes were when I was young. The poor, fifty years ago had to wear the same clothes 365 days a year both in bed and at work. Workmen wore hanten and short close-fitting trousers both summer and winter and the only extra bit of clothing they had to keep out the cold was a thin stomachband. In period dramas you seeterrace people wearing bright red kimono with their hair done up neatly - it's absolute nonsense. The women of the terraces in fact just wound their hair round in a rough bun, they used string instead of sashes and their kimono were made of coarse blue cotton. Some country women, even, could only afford a piece of straw rope for a sash. 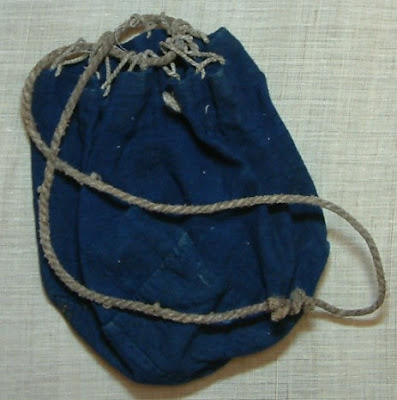 Mrs Katayanagi 'The Midwife'﻿ similarly described the clothing of the poor:  The clothes of the women I attended were often little better than rags and their mattresses were usually filthy dirty and covered in mold, lice and fleas....They sometimes wouldn't have anything in the house to use as diapers for the new baby  so I'd have to fold and stitch up an old towel and that would be the poor little devil's first pair of diapers...
The towel she referred to would probably have been a thin cotton 'tenugui' cloth, not a western towel. Diapers/nappies were usually made from a thin cotton at the best of times. The picture below is an old one in my collection that has been patched together from cheap cotton.  (Even when I had my babies in Japan in the 1990's I found the cloth nappies too thin to be very useful.) 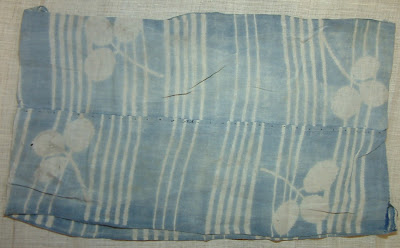 Of course not everyone lived in abject poverty. Mrs Oshima  recounted her experiences of 'Learning to Sew' at a residential sewing school:
`...I remember very clearly...the frustration I felt when I was given, for example, a kimono of habutae silk to sew up  and worked on it for a solid week but still couldn't get it right. The biggest problem was making the neck. Habutae kimono were made of two pieces of material laid on top of each other and when you came to the neckline even if you tried bending the end of the needle it was impossible to get the pieces properly aligned.... I couldn't bear to admit in front of the other girls that I couldn't manage it. So when everyone else was sound asleep I'd get up, sneak downstairs and sew and sew for all I was worth by the light of an oil lamp. If it was winter my hands would go numb and my nose would start to run. I'd work almost in a trance for hours on end until I finally lost all feeling in my legs. Then in the morning thinking I'd got it more or less right I'd take it along to Mrs Kimiyama. And if she said 'Yes, I think this will do'  - well you can imagine how relieved I was.  But if you showed her your work and she didn't find it good enough she'd just put her scissors into the seam and pull out all the stitches however long it had taken to sew....
Reading stories like this gives me enormous respect for the huge amount of time and work that has gone into every handstitched kimono and haori  that passes through the shop. And, yes, I often wonder about the woman who might have made a particular garment as I sit unpicking  her work for it to be recycled, all the way over here in Tasmania! I know some people are horrified to see me taking  kimonos apart  but it doesn't happen to all of them, and I would much prefer for them to be given the chance of a new life in a quilt, an artwork or whatever than to think of them left to the moths and silverfish as so often happens.

* Dr Junichi Saga, Memories of Silk and Straw, A Self-Portrait of Small-Town Japan, ( Kodansha International, 1987).  I don't imagine it is in print any more but if you're interested it would be worth watching out for a second-hand copy or at least checking your local library.
Posted by Jan at 10:40 PM No comments: Links to this post