Some new things in the shop.

I have this lovely, fresh  cotton shibori by the metre: 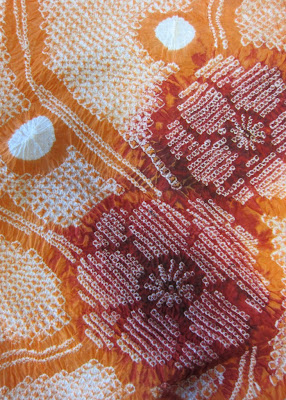 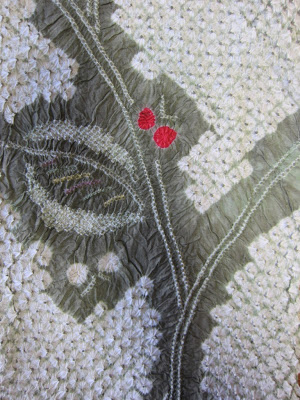 We always have kokeshi dolls in the shop but I've just put out a new selection. Here are a few of them: 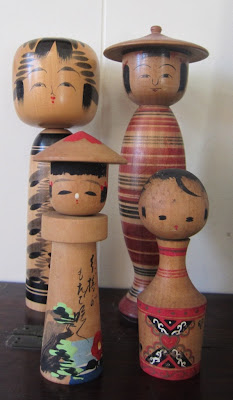 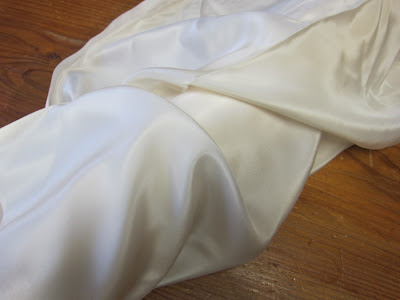 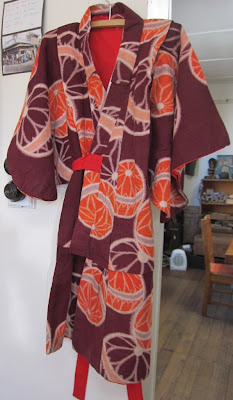 I love this old (pre-war) kimono - the silk is beautifully soft and the  subtle grey contrasts wonderfully with the red lining: 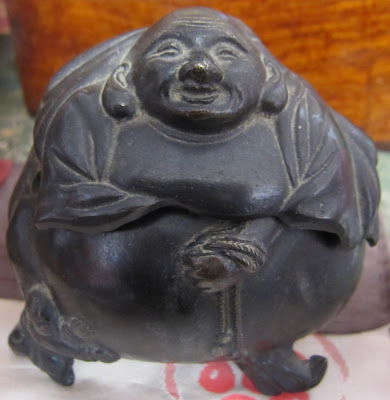 I've made up some quilters' vintage charm packs: 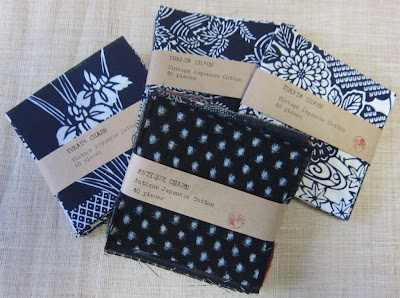 At the moment we have some terrific meisen garments in the shop.  Meisen is a silk (or occasionally synthetic) ikat  which was developed in the late 19th century and was a popular mass-produced, everyday kimono fabric through until the post-war period.  It developed after the introduction of modern weaving and dyeing techniques from Europe.  These technical developments coincided with social reforms in the Meiji period which for the first time allowed ordinary people  to wear silk regardless of their traditional social status ( if they could afford it of course). Here's what we have in the shop right now. I love this bold check kimono. If it doesn't sell soon I'll keep it for my collection.

I also like this haori. The vibrant, dynamic design is typical of meisen. 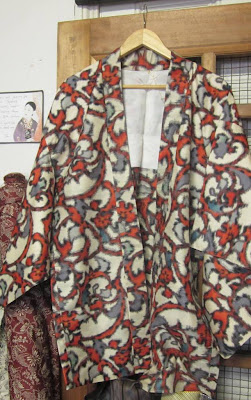 And a couple more kimono.  The green one has a red silk lining which indicates that it's a pre-war garment. Post-war garments typically have a white lining though it isn't a hard and fast rule for dating meisen as some garments are recycled with a different lining.  And  of course some don't have linings at all. 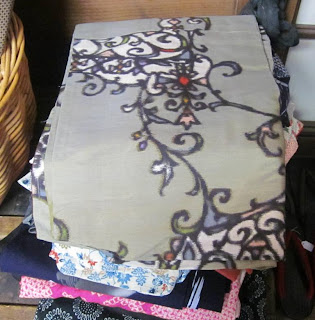 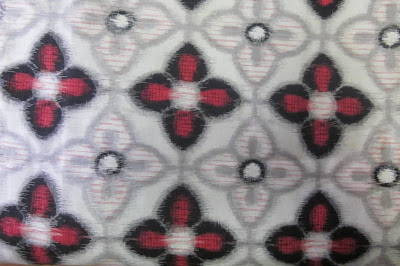 The following  is a fabric that I have in the shop. It's a traditional plum blossom design which isn't very typical of these vibrant meisen patterns.  In  early-mid 20th century meisen designers took much of their inspiration from the west,  and roses and stylised art deco floral motifs are more common than plum and cherry blossoms. 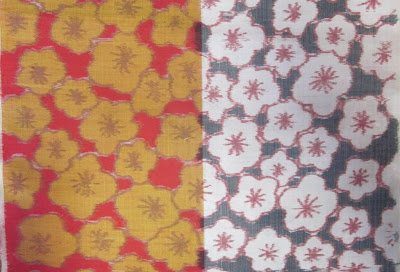 The rest of the photos are from my own collection.  This iris pattern is another traditional Japanese motif but earlier than the plum blossoms.  Unlike traditional cotton ikat (kasuri) in which the threads are tie-dyed before weaving, in meisen the threads are usually direct-dyed with a stencil and then woven. As with kasuri, the meisen technique necessarily creates a soft, fuzzy edged design which is very much part of its charm.  Often both the warp and weft threads are stencilled. In this 'ayame' iris design only the warp has been stencilled. 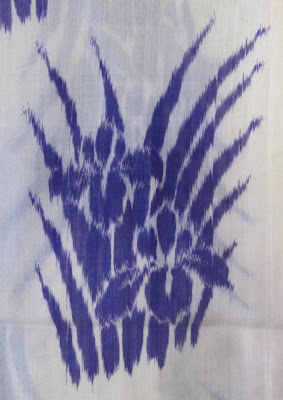 Here are some more typical meisen designs. I only have a  few in my collection (I just don't have the space to collect even a fraction of what I'd like to!) and there are much bolder designs out there with a stronger link to modern art movements. Here's some of what I have though.  I only just noticed what a limited colour range I have.  I think this is more a reflection of my taste than the  variety of vibrant fabrics that were produced! I will try and find some more designs to show you in a future blog. 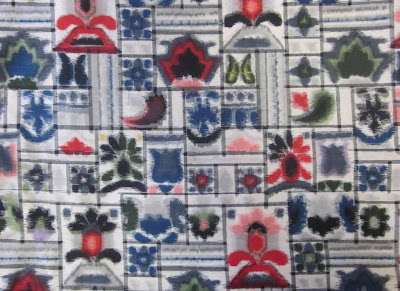 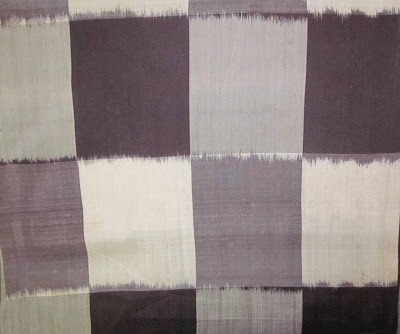 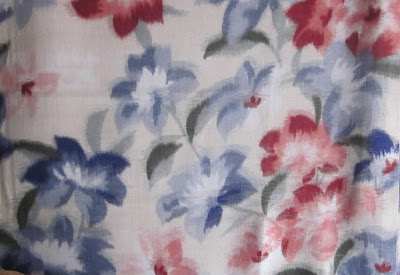 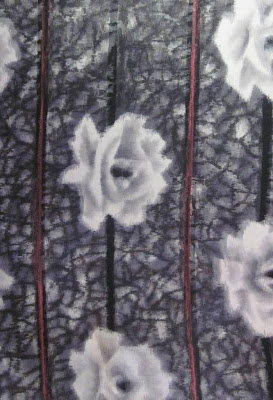 Originally meisen was popular for all types of women from schoolgirls to geisha but it became very much the preferred kimono of the urban middle-class, and especially young women who wanted their traditional outfits with a western  touch. I can imagine the 'modern girls' of the 1920's and 30's promenading in the Ginza with their trendy bobs and their bold meisen kimonos.  Designs became more sombre in the pre-war and  early war time periods. The industry was restarted after the war but didn't survive long. Meisen kimonos were for everyday wear and not for formal occasions  and so as western clothing took over for everyday wear the demand for this kind of kimono decreased.  Meisen originated in Chichibu in Saitama prefecture not far from Tokyo and the major production centres were in the Kanto region around Tokyo. Another centre was Isezaki which had a long history of kasuri production. This is a  1920's or 30's poster that Takashi bought me recently advertising 'Isezaki Meisen': 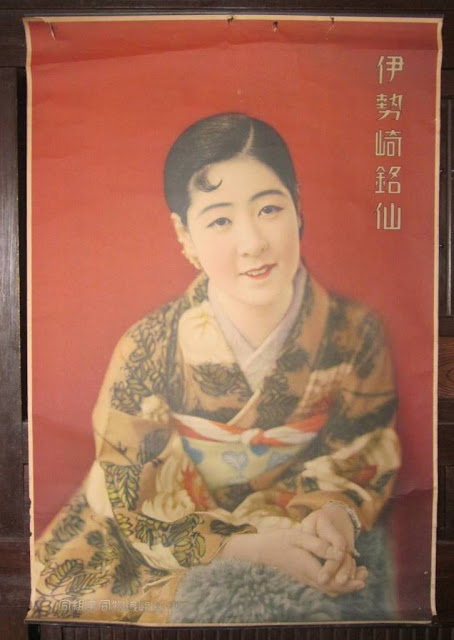 * Much of my information has come from 'Meisen: Early 20th Century Fashion Kimono' by Annie Van Assche in Daruma: Japanese Art and Antiques magazine #22.  (It still makes me very sad that this fantastic magazine is no longer published)﻿