In store - some recent additions

I've had trouble keeping up with the blog  over the summer but now the kids are back at school and Takashi's gone back to Japan for a while I should be able to post more regularly.  Today I'm  posting some recent additions to the shop...
First are two panels of old Iyo-gasuri which is kasuri  from Matsuyama city, very near to where we have our Japanese home in Ehime prefecture on Shikoku.  Iyo is the old name for Ehime. I'm sure I'll write more about kasuri in the future. Basically it  is Japanese ikat where the warp and/or weft threads are tie-dyed before weaving. Where undyed sections of warp and weft thread meets the pattern will be white. The lighter blue/grey colour is created where only the weft threads are undyed. These pieces are e-gasuri or 'picture kasuri'. The one on the left is a koi carp and on the right is a Daruma with a butterfly, toy drum and pine tree.  These panels would orginally have been parts of futon covers and probably date from the early 20th century. 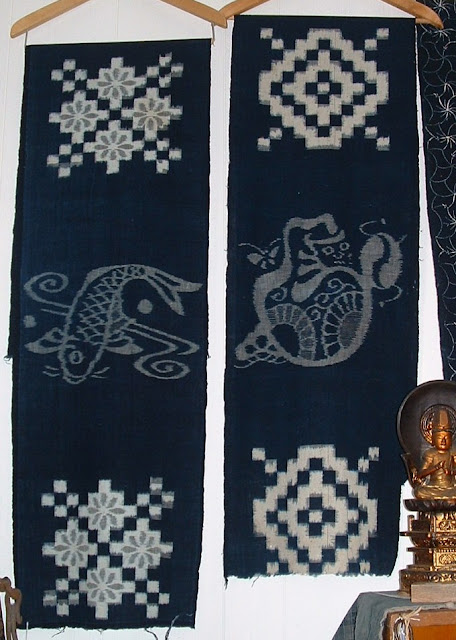 Next are some very simple but interesting old wooden print blocks. I can't tell you much about them I'm afraid, even whether they were used on fabric or some sort of paper (possibly fusuma screen doors?) but they have a nice humble character and  we have a basket of them. 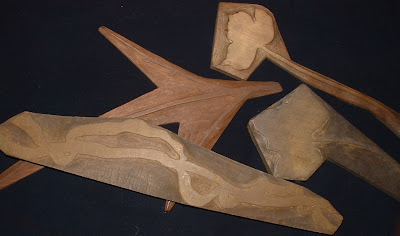 This is part of a wonderful  old ranru or boro  patched futon cover. I couldn't fit the whole thing in the picture. Please have a look at my earlier post on boro for more information. 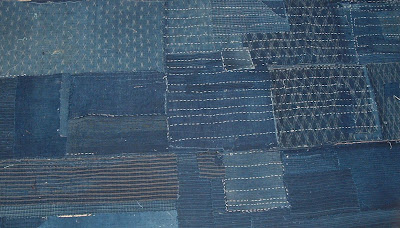 And finally, I've put out quite a lot more obi of various ages, styles, sizes, fibres, textures and condition. 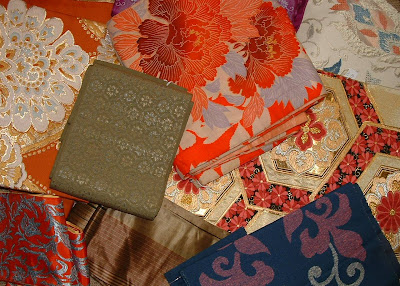 The Year of the Rabbit

This year is the Year of the Rabbit in Japan as well as China. I've loved rabbits since I first rescued a very sad pair from a pet shop in Japan some years ago -  (of course it wasn't a good idea to get a male and a female and I soon had over 20 rabbits!) - and until recently I've always had one or two.   So it's surprising that I don't have many rabbit designs in my textile collection. They just don't come up as often you'd expect and tend to be very expensive when they do. The only rabbits we usually have in the shop are on modern quilting fabric designs.

Rabbits have a long and fairly complicated history in Japanese folklore  and myth - which I'm not as familiar with as I'd like to be.  There are many variations on  ancient stories associating  them with the ocean and also with the moon, some of which originated in China. So in traditional designs rabbits are often seen jumping over waves or looking at the moon.    Here are a few Japanese rabbits from my collection.  The first one is a katagami kimono stencil, probably early 20th century, showing rabbits and waves: 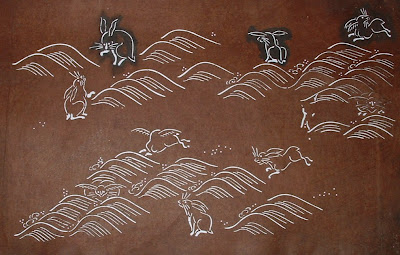 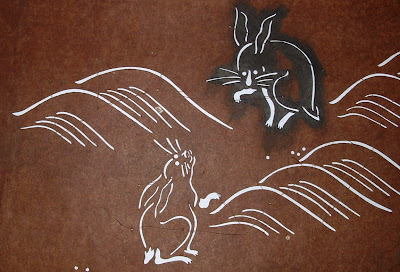 The next rabbits are from a Meiji period (1868-1912) chirimen silk crepe obi, which most likely has been recycled  from a kimono. These soft greys and other subtle tones were typical of one trend in kimono design in that period. 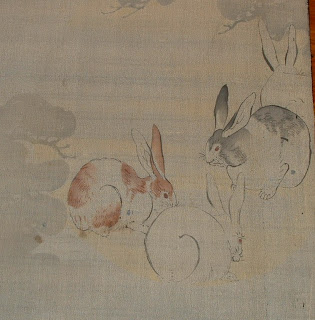 ﻿I thought I'd add a few other Japanese rabbits that I love even though they're not related to textiles at all. The first one is an old painted wooden panel which had been used to acknowledge a shrine donation. We used to have a  few of these in the shop with different designs - and I couldn't resist keeping this one.  These rabbits are having a traditional autumn moon viewing party (tsukimi) with sake and mochi rice cakes. The pampas grass in the background is also a typical  autumn symbol in these rabbit and moon designs. 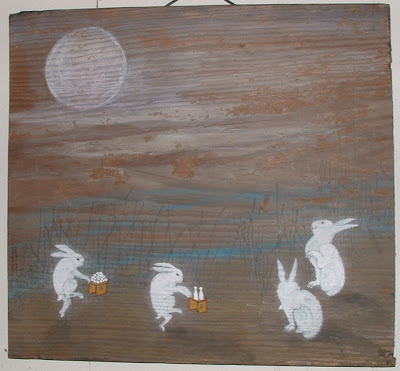 This last one is a  very recent addition to our home. It's an old handmade  pull-along toy rabbit. It may not be the prettiest rabbit I've seen, or typically Japanese, or even as old as the other rabbits I've shown here,  but I love it for it's character and humbleness.
﻿ 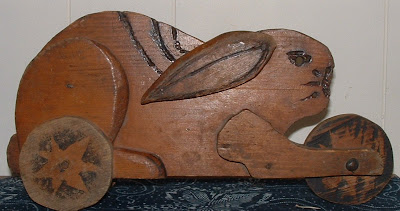