Here are few things that I've just put out in the shop: 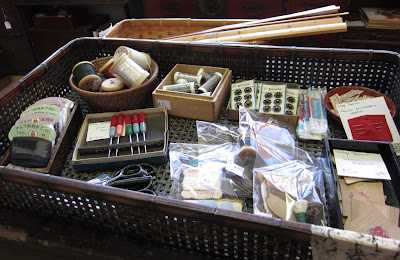 I like having a mix of old and new threads and accessories in the shop and it's fun when they're old but brand-new at the same time  like these lovely old Clover brand awls.  Clover dates back to the 1920's and I often have Clover needles and other items popping up in old sewing boxes, and of  course Clover is still making great quality products which I'm glad to stock in the shop as well. 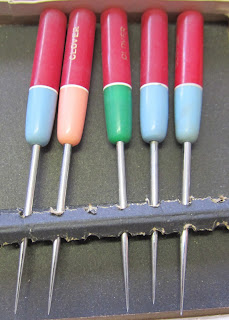 I've also put out these interesting threads which are silk coated with lacquer. They're not very strong but have an unusual texture which would be great for embellishing. They would originally have been used for embroidering on haori jackets. 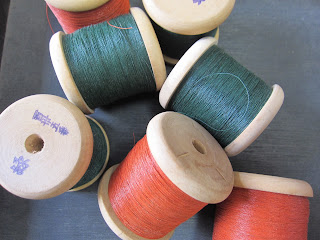 Tenugui are simple unhemmed traditional handtowels made from lightweight cotton. This selection comes from a box of  unopened tenugui that had been gifts for the well-known Kyoto geisha  Mamechiyo (1912-2004). They were still in their original gift envelopes and had been presented by maiko (apprentice geisha) and others.  Many were badly discoloured with age so I've just chosen a few that were in perfect condition. 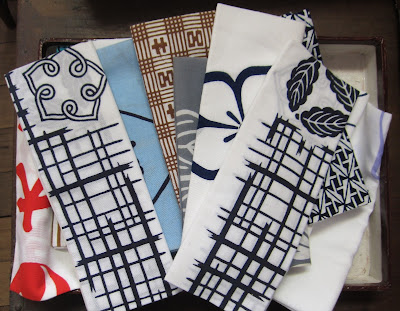 And finally some lovely old hikite handles from fusuma screen doors that I'll be putting out this week: 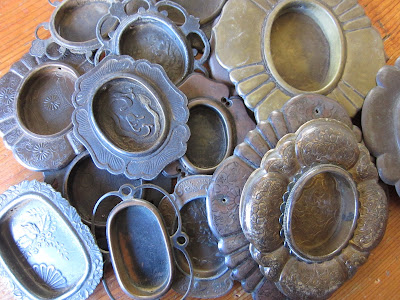 Posted by Jan at 3:26 PM No comments: Links to this post

I got back from Japan last week and have been busy catching up with all the jobs that need to be done here. I hope to be posting  more regularly again now.
One of the highlights of this trip was meeting  Ikuko Miyazaki a wonderful dollmaker from Okayama. Takashi had been researching imon ningyo dolls for me on the internet and came across Miyazaki-san's story of how her father's imon-ningyo inspired her lifelong passion for dollmaking. Takashi contacted her and she very generously invited our family  to visit.
Imon ningyo are small  'comfort dolls' (aka 'mascot dolls') that were handstitched by Japanese women and girls during the war to send to soldiers in 'comfort bags'. Later in the war they were also carried by kamikaze pilots on their final missions. I've been fascinated by these dolls since I first read about them in a paper by Ellen Schattschneider* (Thank you to Victoria Eaves-Young who first introduced me to the article, knowing my interest in both sarubobo amulet dolls and wartime homefront textiles). Surviving dolls are now rare and it isn't easy even to find pictures and information.  In part 2 of this story I'll talk more about imon ningyo and show some of the original  patterns etc that Takashi has found and in part 3 I hope to share the story of another lovely woman we met on this trip who made imon ningyo as a high school student, one of which has survived.
This is Miyazaki-san's father's imon ningyo: 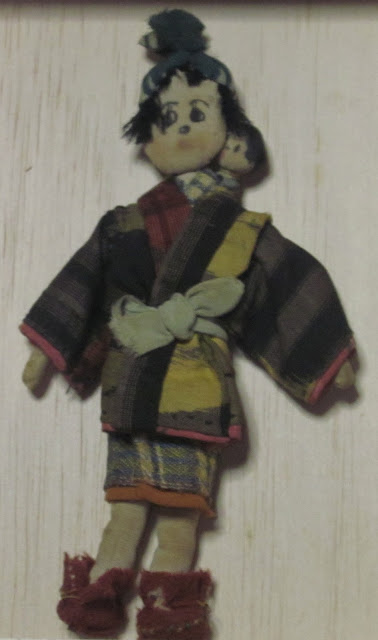 It's about 20cm long  (many are much smaller) and like many of the dolls is a woman in wartime dress carrying a baby on her back.  Miyazaki-san found it in her father's desk drawer when she was ten and asked if she could play with it. He said 'no' without any explanation which confused her as she couldn't understand why a man would want a little doll like that. She asked her mother who told her that her father had received it in an imon bukuro (comfort bag) during the war and  had brought it back with him.  It may be hard to imagine how soldiers felt about receiving these dolls but the way that Miyazaki-san's father had treasured this for the rest of his life shows what importance the doll held for him. Miyazaki-san felt that it had been especially comforting to him because he had lost his mother as a young child.
This experience  inspired Miyazaki-san to begin making her own dolls, which she continues to do now. For the last 15 years she's been making art dolls based on the paintings of Austrian painter Egon Schiele, which she has exhibited  around Japan and in Prague.  These dolls are amazing! Some are larger than life and all are exquisitely made. I'm not sure how many she normally has around her house but she had put out even more to greet us in every hallway, through the window and even in the garden. The photos below are only a small sample.  It was an incredible welcome: 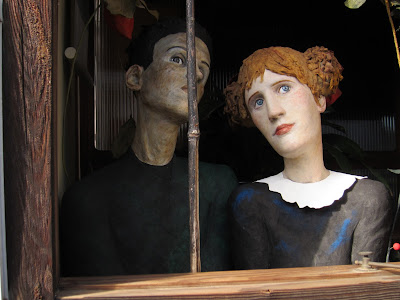 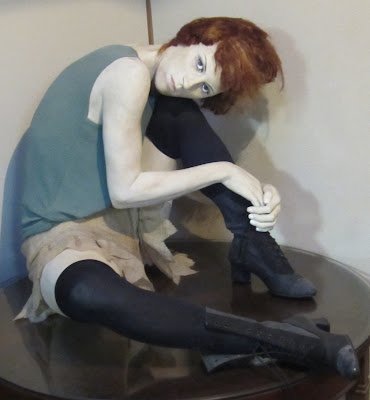 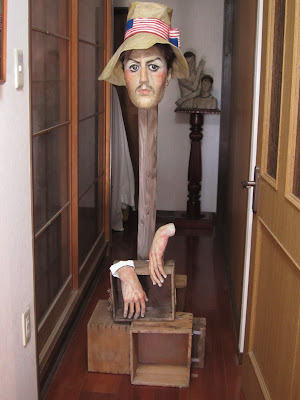 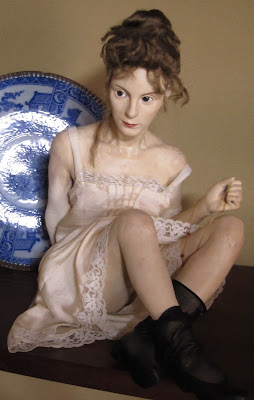 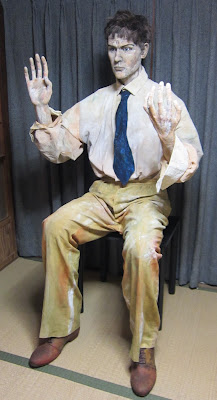 After  the earthquake and tsunami in March it didn't feel right to her to be enjoying the luxury of making her art dolls and so instead Miyazaki-san began making these lovely simple wrapped dolls to send to the survivors. They're based on Guatemalan worry dolls. 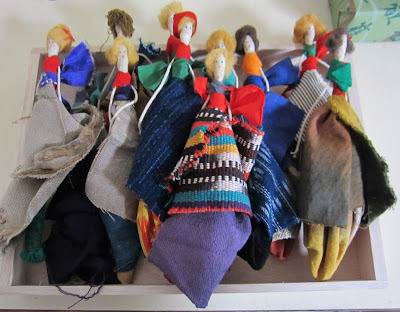 It was really a pleasure and a privilege to meet Miyazaki-san. She generously  welcomed the four of us into her home, shared the story of her father's imon ningyo and introduced us  (too modestly) to her own incredible works of art. She made us feel instantly at home and like we were old friends.  I know I will be meeting her again and am looking forward to seeing what she creates next.  If anyone is interested in seeing more of her dolls  her website (with some English) is http://www1.ocn.ne.jp/~kmz/ 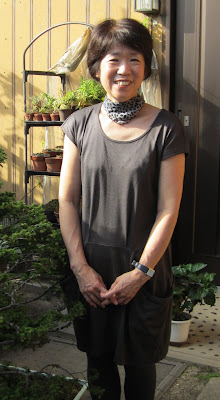 *Ellen Schattschneider, 'The Bloodstained Doll: Violence and the Gift in Wartime Japan' in the Journal of Japanese Studies, 31:2, 2005
Posted by Jan at 8:52 PM No comments: Links to this post