The 10th anniversary of the shop fell on the 3rd March this year which coincidentally is also Girls' Day or Hina Matsuri in Japan. So to celebrate we invited our regular customers to come and see  my daughter Ayame's Hina Ningyo doll display. We don't put the dolls out very often as we just don't have enough  space  - so it was lovely to have them out to enjoy again. The display isn't old - it was a special gift to Ayame on her first Girl's Day from a very dear friend when we still lived in Japan. 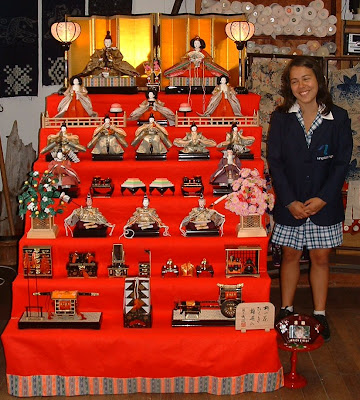 Hina-matsuri in its present form only developed in the Edo period (1600-1868). This d﻿isplay is a typical 15 doll  set. At the top are the Lord and Lady of the court, then three ladies in waiting, five musicians, the Minister of the Left and the Minister of the Right,  three footmen and the Lady's household items.
The traditions and meanings associated with Hina matsuri have changed over time. It's origins have been traced back to Chinese purification rites and in pre-Edo times it was a purification ceremony associated with the emperor in which dolls used throughout the year were set out to sea on little boats. There is a strong tradition in Japan of using dolls as talismans which absorb evil or illness and are then destroyed.  Similarly in another ancient hina tradition paper dolls called nademono or 'rubbing things' were rubbed on the body to absorb evil and then destroyed.
Another form of hina doll called tachibina  or 'standing hina' evolved from the nademono. These were also originally made from paper  and later fabric. They were popular by at least  the early 16th century when there were specialist makers in Kyoto.  Tachibina were placed on trays of offerings during the festival  to attract  kami (Shinto gods) into the house where they would inhabit the dolls and offer protection and purification.  Here are some tachibina from my collection which we also displayed as part of our celebrations. These probably date from the 19th - early 20th century: 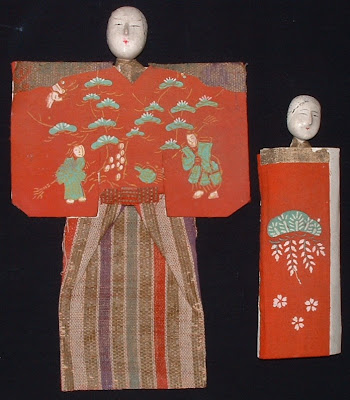 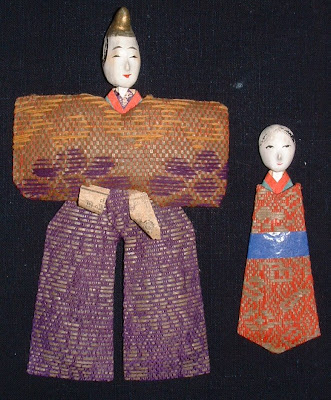 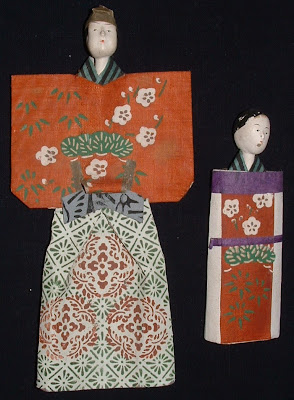 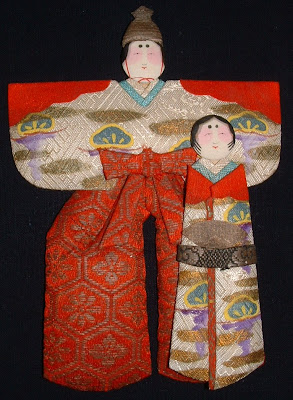 For more information on various Hina dolls and traditions have a look at Alan Scott Pate's 'Ningyo: The Art of the Japanese Doll' (Tuttle, 2005).
Posted by Jan at 9:04 PM 1 comment: Links to this post

Thank you for all the calls and messages we've had  from  friends and customers concerned about our family in Japan.  My husband Takashi was on the highway in Nagoya at the time which is quite a way south of Tokyo  so he was just shaken around a little and is fine. Our house is down south on the Inland Sea coast of Shikoku so wasn't a worry.
Our thoughts are all with the people who have suffered and are still suffering.
Posted by Jan at 5:45 PM 2 comments: Links to this post

Here are some katagami stencils from my collection, including some of the stencils which I used images from in my last newsletter. These stencils are made from layers of washi paper which are treated with persimmon tannin and smoked to make them waterproof and durable. They are then finely cut by hand and in more open patterns fine silk threads are added between the layers of paper to stabilise the design.  Katagami stencils are used in a variety of  Japanese textile traditions including yuzen dyeing which usually involves building up a design with a selection of  stencils and colours in combination with other techniques,  komon ( 'small pattern') and chugata  ('medium stencil') kimono fabrics,  and indigo-dyed katazome (lit.stencil dyed) futon cover fabrics.  What these techniques have in common is the use of a rice-paste resist applied through a stencil either with a brush or special spatula.
These stencils all date from late-19th - early 20th century.  Most will have been used on kimono fabrics but the first one at least would more likely  have been used on an indigo futon cover. The rope and anchor designs were often used separately on futon covers which were part of a trousseau, as an alternative to the more traditional marriage imagery such as cranes, pines or turtles.
You can click on any of the images for a closer look. 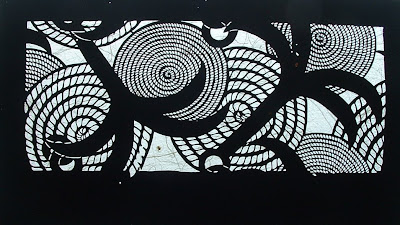 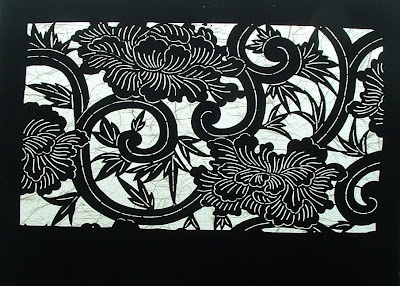 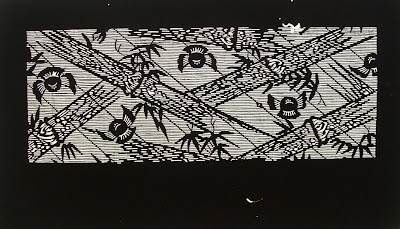 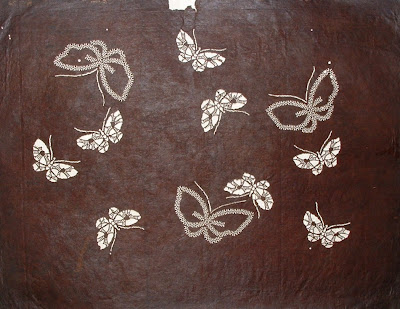 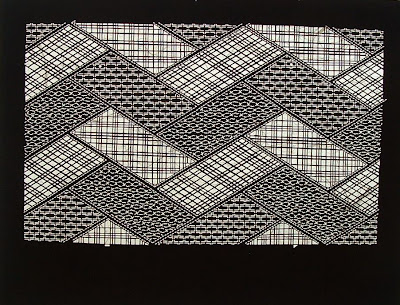 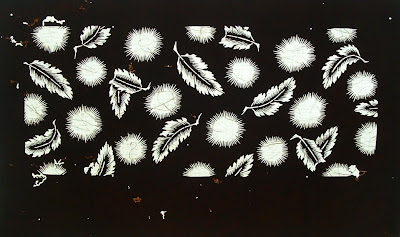 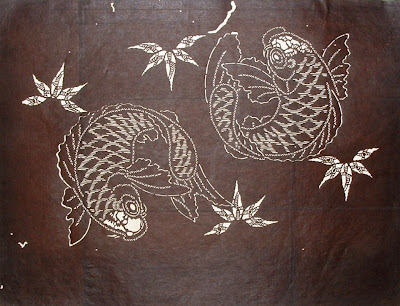 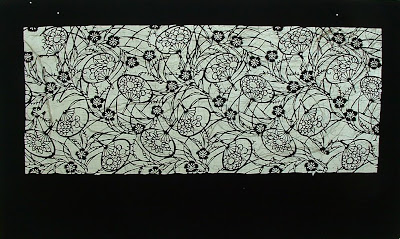 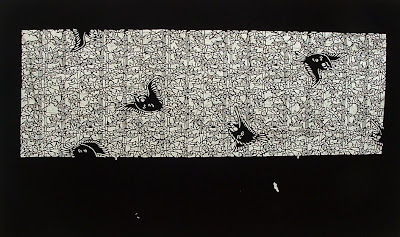 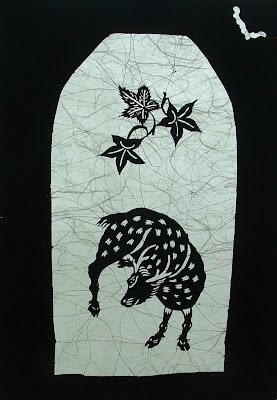