We recently celebrated Hari Kuyo for the first time in the shop. This is a traditional Japanese ceremony to thank and lay to rest old and broken sewing needles. Needleworkers often rest on this day and pray for improvement in their stitching skills.  Their old needles have not only worked hard but are believed to have absorbed some of their spirit and heard all of their secrets (!) and so they are thanked and gently laid to rest in a soft bed of tofu or konnyaku jelly. 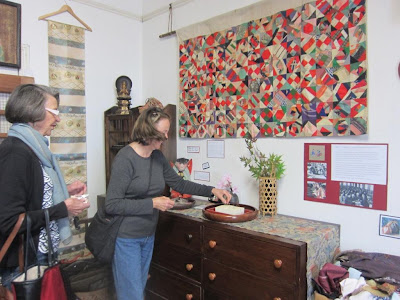 ﻿
This seemed like a good chance to appreciate the tools of our craft and celebrate stitching.  Broken machine needles were also welcome. We combined it with a display of old stitched textiles from my collection. 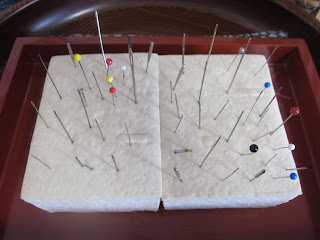 The origins of Hari Kuyo aren't clear (to me at least) and there doesn't seem to be agreement on how long it has been practised, but at least 400 years. It is usually, but not always, celebrated on 8th February in the north of Japan and 8th december in the south in both Buddhist temples and Shinto shrines. Some schools also celebrate it and in the past it was often performed in the home. Hari means needle (or pin) and kuyo is a Buddhist memorial ceremony. Hari Kuyo is a blend of a Buddhist memorial with the Shinto animist belief that all beings and objects have a soul. Our local shrine in Japan has a similar ceremony for old calligraphy brushes. 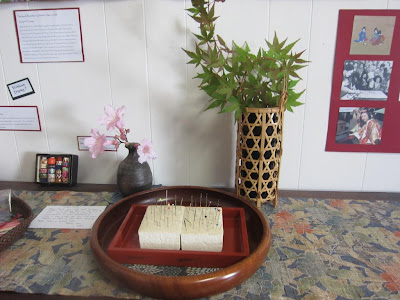 We had a bit of a dilemma as to what to do with the needles after the ceremony! In Japan they would  be buried at the shrine or sometimes floated off on a river. It seemed a little disrespectful for us to just throw them in the bin so Takashi suggested we make a burial spot in our garden.  So this is our needle grave, which we can reopen for future Hari Kuyo - in an old ceramic kiln stand under the millstones outside the shop window: 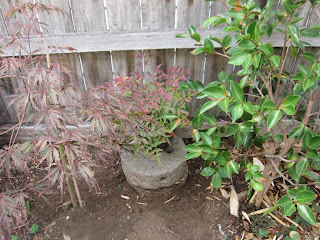